Amsterdam’s top attractions range from quirky to futuristic. Get stuck into Amsterdam tourism with this list of top things to do and see in the Dutch capital.

If you’re sightseeing Amsterdam, this list of top Amsterdam attractions will only scratch the surface of Amsterdam’s many sites and experiences. Amsterdam’s best things to do and see range from quirky museums and a secret church to rowdy flower auctions and vibrant street markets. Visit Amsterdam to explore its intricate, UNESCO canal network, roller-blade past Picasso art, or surround yourself with panoramic cinema. Its diverse and quirky attractions make Amsterdam a top place to visit.

Immerse yourself in Amsterdam’s tourism with this list of the best places to visit in Amsterdam: cross off the top sites, attractions, museums, galleries and activities in the Dutch capital.

1. Discover Amsterdam’s many and varied museums

The Netherlands has the highest concentration of museums in the world. The grandest, the Rijksmuseum, houses the country’s most famous works, especially – but not exclusively – by the Dutch Masters of the Golden Age. It underwent a 10-year restoration and the result is magnificent with a light-filled atrium and Asian Pavilion. As the top museum of the Netherlands, its vast collection focuses on 800 years of Dutch art and history from the Middle Ages onwards and on major aspects of art from the rest of Europe and Asia. The best-known painting in the Rijksmuseum is Rembrandt’s largest and most famous canvas known as The Night Watch (1642). There’s more to the Rijksmuseum than paintings: you can also see sculptures, glass, Delftware, furniture, clothing and archaeological artefacts among the 8,000 objects on display.

To see the world’s largest collection of works by impressionist artist Vincent Van Gogh, head to the Van Gogh Museum showcasing works from his early life as a ‘peasant painter’ to his darkest days. Among the 200 paintings and 500 drawings, you can see some of Van Gogh’s most famous masterpieces, including Sunflowers, Almond Blossom and The Potato Eaters, plus many of his self-portraits. He was a prolific letter writer, too, and you can read all of Van Gogh’s letters to his brother Theo, his friend Paul Gauguin and others at the museum. There are also works by his contemporaries Gauguin, Toulouse-Lautrec and Monet.

For contemporary art, see the Stedelijk Museum and independent art galleries, such as Radar and Galerie Fons Welters. 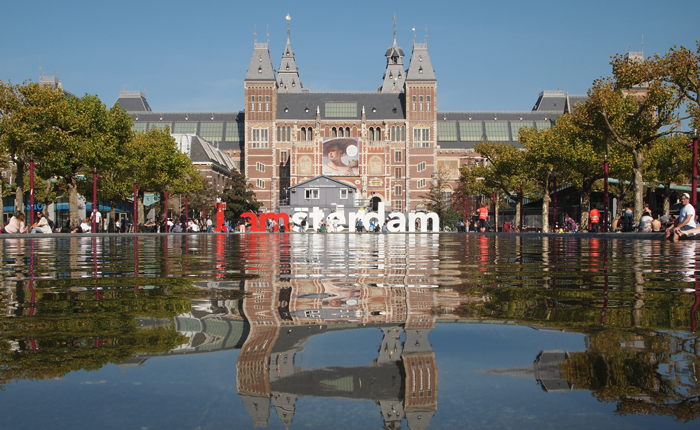 Amsterdam has some quirky, small museums, too: check out Electric Ladyland for a collection of all things fluorescent, the Dutch Costume Museum for an overview of local traditional dress and folk art per region or the Vrolik Museum, a somewhat gruesome collection of pathological specimens, odd skulls and bones that belonged to anatomy professor Geradus Vrolik (1755–1859) and others.

The Bloemenmarkt is the only floating flower market in the world. There are 15 florists and garden shops on houseboats moored between 630 and 600 of the Singel canal between the Koningsplein and the Muntplein, selling all types of flowers and bulbs but especially tulips. Before you buy, however, check the customs regulations of your home country – some countries restrict bringing in seeds and bulbs, and your purchases could be confiscated on your return. 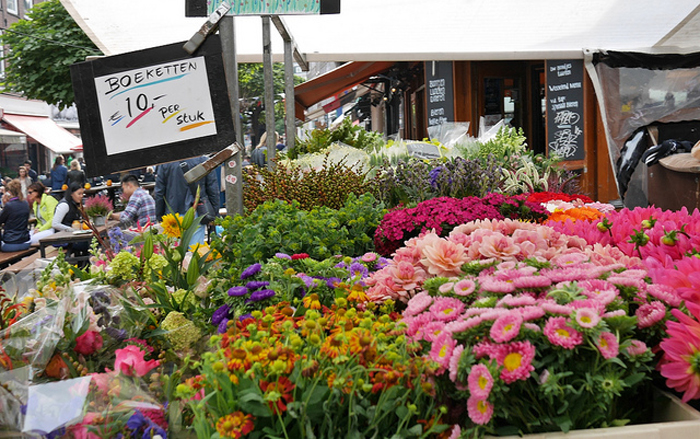 Find out how the flowers get to the floating market by going behind the scenes of the FloraHolland flower auction, the world’s largest trading centre for plants and flowers. This auction takes place at Aalsmeer, not far from Schipol airport, and is open to the public from 7am to 11am on Mondays, Tuesday, Wednesdays and Fridays, and on Thursdays from 7am to 9am – get there as early as possible to see the action.

Amsterdam’s Canal Ring or Belt (known as the Grachtengordel), a network of intersecting waterways, were created in the Golden Age of the 17th century to protect the old medieval city from the sea. Singel was the medieval city’s moat. Herengracht, Keizersgracht and Prinsengracht were built for rich 17th-century merchants and most of their grand gabled houses are still standing. The inter-connecting canals were built for workers and traders: today Leliegracht, Bloemgracht, Egelantiersgracht, Spiegelgracht and Brouwersgracht have upmarket houses, shops and cafes and are all good for browsing. Amsterdam’s 165 canals and 80 bridges were awarded UNESCO World Heritage Status in 2013.

You can take a cruise, a ‘hop on and off’ tour, or hire your own boat or pedalo. Stop off to discover more about the history of the Canal Ring at the Museum of the Canals (Het Grachtenhuis) or visit a 17th-century, canal-side mansion at Museum Willet-Holthuysen and Museum Loon (the Van Loon family co-founded the Dutch East India company). 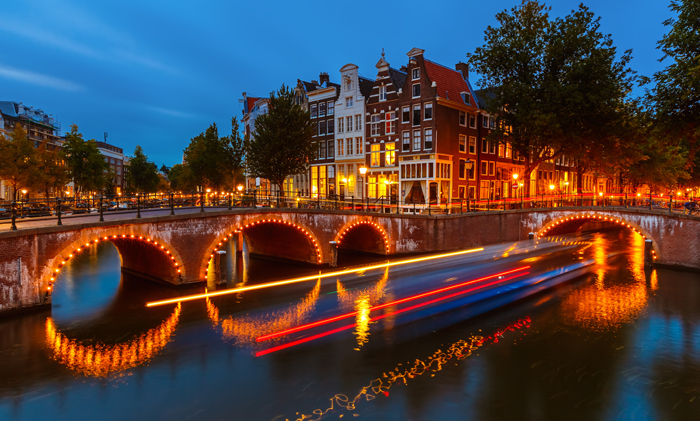 There’s always lots happening on the canals: you can take a ride on the famous pancake ferry, where you can eat as many Dutch pancakes as you like on a 75-minute cruise through Amsterdam, or enjoy the 10-day Grachtenfestival (canal festival) held every August, when the canals are filled with the sound of classical music.

4. Find out about life under the German occupation of the Netherlands

The Nazis occupied the Netherlands during World War II. Jewish teenager Anne Frank, her family and four others lived in hiding from the Nazis at Prinsengracht 263 for more than two years during World War II. They lived above Anne’s father Otto’s business in a secret annex hidden behind a moveable bookcase until they were betrayed in August 1944. They were deported to concentration camps and all but Otto Frank perished. Anne’s diary from the time in the secret annex is now one of the world’s best-known books. At the Anne Frank House museum, you can see the tiny rooms where Anne and the others lived, together with some of their personal belongings and the original diary.

There are both permanent and temporary exhibitions about Anne Frank’s life and times. During the occupation, some Dutch citizens fought against the occupation and you can find out more about this at the Verzetsmuseum, the Dutch Resistance Museum.

5. Take a stroll in the Vondelpark

Vondelpark, named after the famed Dutch poet Joost van den Vondel (1587–1679), is Amsterdam’s most popular park with restaurants, cafes, an open-air theatre and a wonderful rose garden. There’s even an original Picasso in the park. The concrete Figure découpée l’Oiseau (‘the bird’) was created in 1956 by Picasso as part of an outdoor sculpture show to commemorate the 100th anniversary of the Vondelpark and was donated to the park by the artist. For exact locations, consult this map of the Vondelpark. 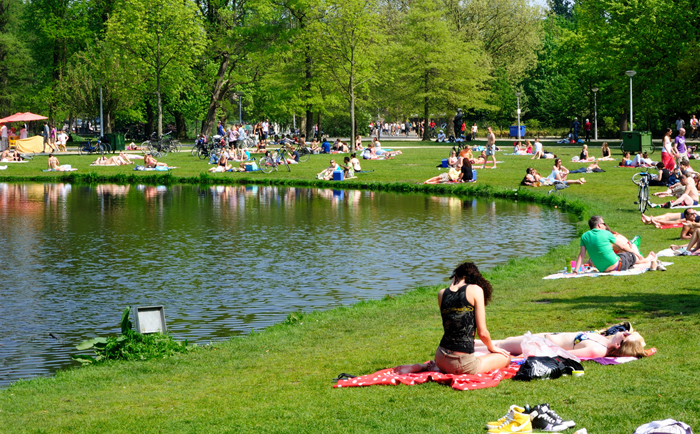 Every Friday, so long as it’s dry, skaters meet in Vondelpark around 20pm (20:15pm in winter) to make a 20km roller skate tour around the city. The route changes every week and it’s free to join in but you do need to be able to skate (and brake) well. You can rent skates at the park entrance. You can read more about Friday Night Skate.

6. Catch a movie at the Eye Film Institute

Film buffs will want to experience Amsterdam’s ‘house of film’, Eye, a museum dedicated to movies with four cinemas, an exhibition space, workshops, a library and a café-restaurant. Situated across the IJ harbour, the building itself looks like architectural origami, as if it’s been folded out of a piece of white card. There are great views across the IJ waterfront towards the city’s Centraal rail station from the café-restaurant.

There are screenings, talks, live music and exhibitions. Immerse yourself in film in the 360° panorama room where you can browse film clips and scenes, which are continually projected onto the walls, or sink into one of the space-age viewing pods, which are mini cinemas where you can watch – or even ‘act’ – ­ in a film. 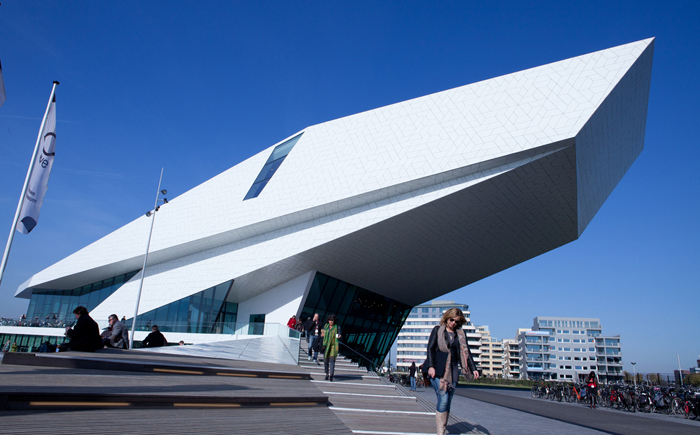 Back over in the city centre, between the Munt Tower and the Rembrandtplein, is the fabulously ornate Art Deco Pathé Tuschinski cinema. Commissioned by Abraham Icek Tuschinski in 1921, it shows a mix of Hollywood mainstream and art-house films.

7. Rent a bike in Amsterdam

Riding a bike is one of the quintessential Amsterdam experiences: you’ve got to try it at least once. It’s safe and easy because the city is so flat and there’s an excellent network of cycle lanes. Almost everyone rides a bike in Amsterdam – even members of the royal family, which would be unheard of in other countries – and there are supposedly around 800,000 bikes in the city. There are lots of places to rent bikes, such as MacBike (who also offers guide-led tours), Rent-a-bike (tours, city bikes and tandems) and Star Bikes (traditional sturdy Dutch cycles). 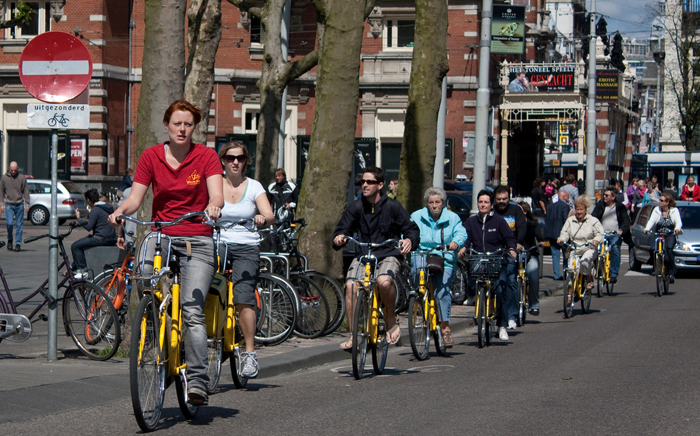 Explore on your own, or book a guided bike tour around the key attractions with Yellow Bike, who also organise tours out into the Dutch countryside.